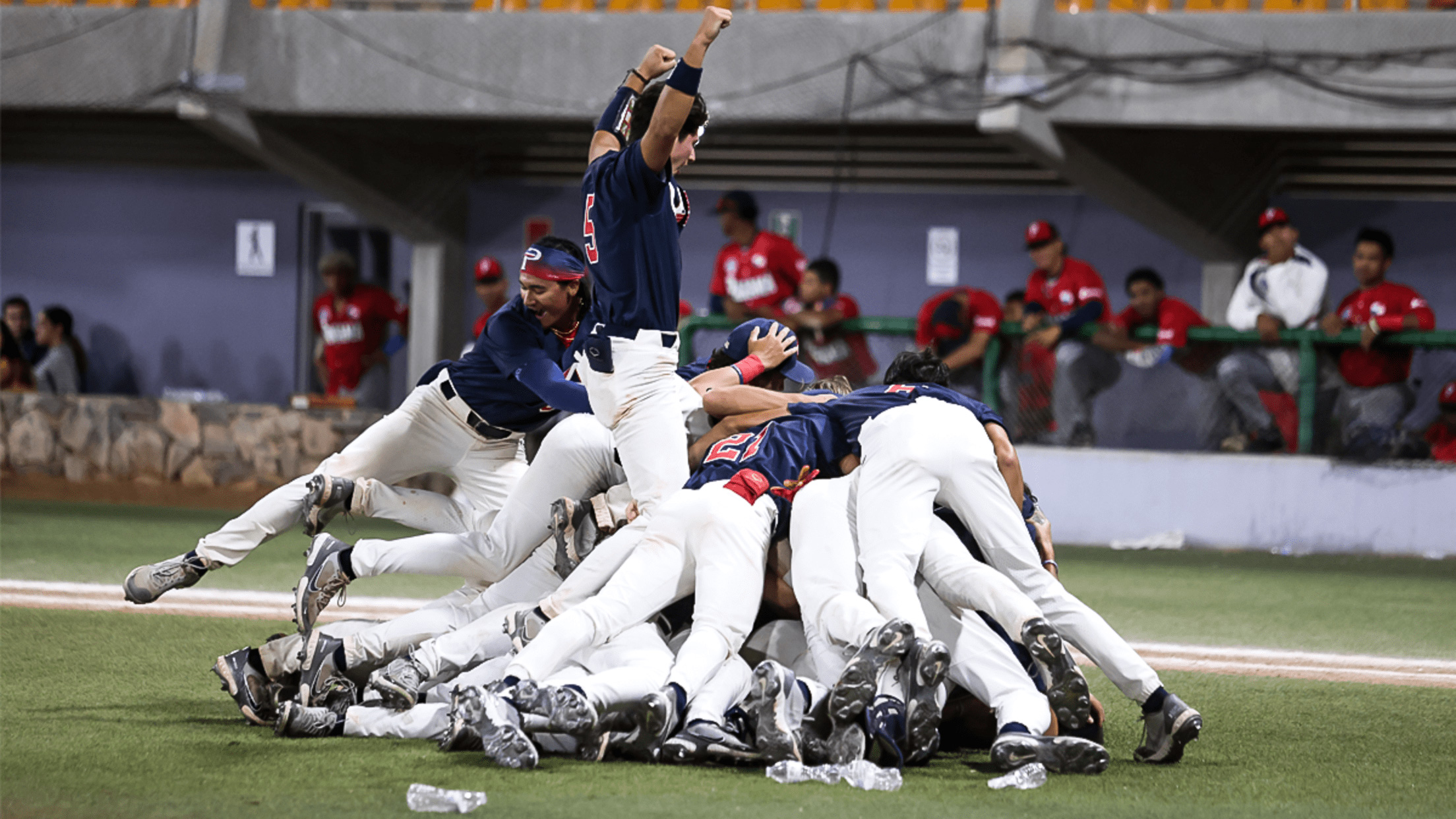 The following was written by USA Baseball on November 14, 2022.

It is the sixth consecutive WBSC U-18 Baseball World Cup Americas Qualifier title for the 18U National Team, as the program has won gold at every tournament since 2009.

What seemed to be a pitchers’ duel turned into a blowout win for the U.S. thanks to a 10-run fifth inning in which Team USA batted around before recording an out. The outburst began when Nazzan Zanetello (Florissant, Mo.) hit a leadoff double–his first of two extra-base hits in the inning–before coming around to score on an RBI single by Ty Southisene (Henderson, Nev.). Casey Borba (Santa Ana, Calif.) then picked up an RBI knock between two bases-loaded walks as the stars and stripes kept the line moving to take a 5-0 lead.

Three straight hits continued the massive U.S. rally. Roman Martin (Whittier, Calif.) and Macon Winslow (Hertford, N.C.) hit back-to-back opposite-field singles to each drive in a run before Zanetello delivered the massive blow. With the bases loaded, Zanetello hit a bases-clearing, three-run double for his second extra-base hit of the frame to make it a 10-run lead for the United States. The final run of the outburst came on the first out of the inning, a Noah Franco (Downey, Calif.) RBI groundout that grew Team USA’s lead to 11-0.

Before the scoring onslaught in the fifth, the U.S. and Panama were locked in a nailbiter. Austin Nye (Roseville, Calif.) started for Team USA and was nearly unhittable in his five innings of work, striking out seven and earning the win. Aside from a one-out single in the first and a leadoff walk in the fourth, Panama’s lineup was unable to muster anything off the righthander, who was named Tournament MVP after posting a spotless 0.00 ERA in seven innings over two appearances.

The U.S. was only able to score once in the first four innings while Nye kept Panama in check, cracking the scoreboard in the bottom of the second. After Panama right fielder Ricardo Tivey made a perfect throw to nab Martin at the plate for the second out of the inning, Daniel Arambula (Yucaipa, Calif.) hit Team USA’s third single of the frame to get on the board, squeaking an RBI single inside the first-base bag to plate Zanetello and put the U.S. in front by a run.

After a quick third inning saw both sides go down in order, Nye walked the leadoff batter in the top of the fourth to put a runner on for Panama with the heart of its order due up. The righthander quickly locked back in, however, and struck out the next batter before inducing a 6-3 double play to keep Panama off the board. The leadoff base-on-balls was the only batter Nye walked in his masterful performance.

The U.S. followed suit by drawing a walk to lead off the bottom of the fourth, but like Nye, Panama righthander Emanuel Vargas escaped the inning unscathed. After getting Martin looking for the first out, PJ Morlando (Summerville, S.C.) was caught stealing and Winslow grounded out to third as Team USA was unable to build on its one-run advantage.

With only one run of support at the time, Nye continued dealing in the fifth. Panama’s Jose Aparicio sent a deep fly ball to the warning track on the first pitch of the inning, but Winslow tracked it down at the wall before Nye struck out the next two batters for his sixth and seventh punch outs of the day.

The U.S. then came to the plate and spent nearly 50 minutes on offense in its 10-run fifth inning to put the game out of reach. The first 10 batters to come to the plate reached base for the stars and stripes and all 10 scored as the offense collected seven hits and drew two walks in the frame. Panama was forced to make three pitching changes during the inning, using four pitchers to retire the U.S. side.

With Nye spending almost an hour in the dugout during the rally, Team USA turned to Carson Messina (Summerville, S.C.) to get the final six outs. Messina worked through some control issues in his two innings and allowed a run in the seventh before striking out Joaquin Gamba to secure the championship win for the United States.

Zanetello continued his tear at the plate in the tournament finale, going 3-for-3 with three runs scored and two driven in. It was the fourth multi-RBI game of the tournament for Zanetello, who hit seven of his nine total hits for extra bases. Arambula and Martin each had two-hit days and drove in a run for the U.S., and Southisene was 1-for-4 with a walk, meaning he reached base in all seven games he played in.

Nye’s final line was superb. The California native lasted five innings and allowed just one hit while striking out seven before handing the ball to Messina, who punched out two batters. The U.S. pitching staff finished the tournament with 65 strikeouts, the most of any team.

Manuel Moreno, who started for Panama and allowed one run in two innings, suffered the loss.

The United States was also atop the leaderboard in several offensive categories, including home runs (10) and runs scored (79). The 10-run fifth inning was the second time the stars and stripes scored nine or more runs in an inning during the tournament as they put up nine against Peru in a massive third frame during pool play.

Team USA was well-represented in the tournament award ceremony. Nye was named MVP after posting a flawless 0.00 ERA in two appearances, throwing seven total innings and striking out a team-best 12 batters. He also had a hit in his only plate appearance, smoking a two-run double in the tournament opener against Peru.

Morlando earned the title of Batting Champion after being a force in the batter’s box all tournament long, accumulating a .333 (7-for-21) average with three homers and nine RBIs. The three blasts tied six other players in U.S. history for most homers hit at a WBSC U-18 Baseball World Cup Americas Qualifier. Morlando had a hit and RBI in all but one of the games he played in.

Zanetello earned the Stolen Base Champion title after swiping a tournament-most five bags. The speedster stole three total bases in pool play action before picking up two more in the Super Round against Mexico and Nicaragua.

Additionally, three U.S. players earned spots on the All-Tournament Team. Arambula was named to the team at third base thanks to his .353 average with five RBIs, including his run-scoring hit in the title game. Borba earned his spot as a first baseman after batting .360 with two homers and driving in a tournament-high 13 runs, collecting two multi-hit games. Campbell Smithwick (Conway, S.C.) got the honor at catcher, touting a .250 average with five RBIs in addition to catching the only runner who tried stealing with him behind the dish.