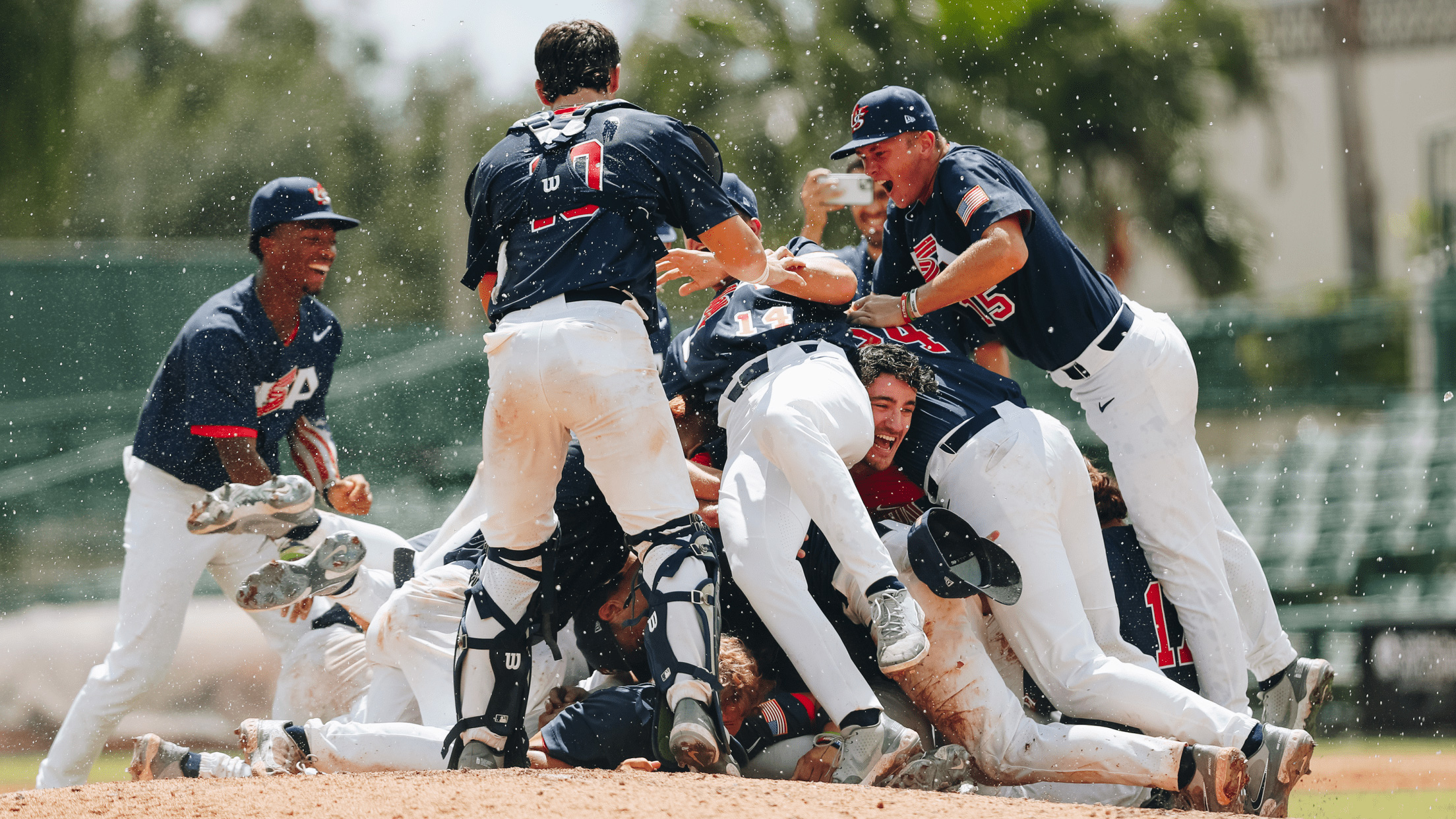 The following was written by USA Baseball on September 18, 2022.

The world title is the United States’ fifth gold medal in the last six World Cups at the U-18 level, dating back to 2012. Additionally, it is the third time the U.S. has won gold on its home soil, as it also earned titles in the United States in 1995 (Boston) and 1982 (Knoxville, Tenn.). Overall, it’s the ninth world title for the 18U National Team.

Chinese Taipei struck first in Sunday’s contest, plating a run in the second inning for the early advantage. Nian-Hao Wang started the inning with a ground-rule double over the center field wall, and then after moving to third on a passed ball, he scored on Chien-Hsi Huang’s RBI single to left field.

Despite being held in check offensively by Chinese Taipei’s Sheng-En Lin for the early part of the game, Team USA knotted the score at 1-1 in the fourth inning. After Eldridge drew a one-out walk and advanced to second on a groundout, he scored on Gavin Grahovac’s (Orange, Calif.) RBI single to left field to score Team USA’s first run and even the score. Eldridge finished the tournament scoring at least one run in every game.

The U.S. then scored again in the fifth inning for its first lead of the contest. Kendall George (Houston, Texas) started the frame with a double down the left field line, moved to third on a sacrifice bunt, and scored on a wild pitch to put the U.S. up 2-1. George’s double was his team-leading third of the tournament and was one of three extra-base hits for the stars and stripes in the win.

After Mitchell continued posting zeros for the U.S. on the mound, Eldridge added insurance in a big way in the seventh inning, capping his stellar tournament with a three-run home run to left field. The dinger brought home Stone Russell (Bradenton, Fla.) and Aidan Miller (Trinity, Fla.) to give the U.S. some breathing room and send the Team USA faithful into a frenzy.

Eldridge then took the mound in the seventh and shut the door to secure the victory, working around a one-out walk and striking out the final batter for the win. It is the third time the United States has defeated Chinese Taipei in a gold medal game at the U-18 level, with the two previous meetings coming in 1999 and 1995.

Dallas, Mitchell, and Eldridge combined for a strong performance on the mound, holding Chinese Taipei to just one run on three hits. Dallas pitched the first 3.1 innings of the victory, allowing a pair of hits and one earned run. Mitchell entered in the fourth and was nearly unhittable, giving up just one hit and a walk while striking out three to earn the win. Mitchell got himself out of two jams in the outing, stranding runners on third in the fourth and fifth innings to preserve Team USA’s lead. Sheng-En Lin suffered the loss for Chinese Taipei.

Max Clark (Franklin, Ind.) had three hits for Team USA, who combined for nine total knocks in the win. Eldridge reached in three of his four plate appearances, homering and drawing two walks in the contest. Russell had a two-hit game and scored a run for the gold medalists.

In addition to being named All-World Designated Hitter, Eldridge took home the Most Valuable Player award. The Virginia native batted .316 (6-for-19) in the tournament, cranking three homers and driving in 13 runs – both tournament highs. Eldridge was also dominant on the mound, throwing three scoreless innings over three appearances and striking out five. He went 1-0 with a save and allowed just one hit across the three appearances.

Miller was named to the All-World Team as a right fielder. The two-time gold medalist hit .478 (11-for-23) in the tournament and earned the batting champion title after collecting hits in seven of the nine games. He also scored a tournament-most 12 runs, touching home in each of the team’s final five games to earn the runs champion title. Miller cranked three triples, leading the tournament and becoming just the third player since 2010 to hit three triples in a single tournament.

RJ Hamilton (Hoover, Ala.) was named the stolen base champion after going a perfect 5-for-5 swiping bags in the tournament.